They're back!! Mercury - The World's leading 'Queen' Tribute Band

Mercury, now celebrating their 20th anniversary, has established itself as one of the world's most authentic tribute bands to Freddie Mercury and Queen. This award winning Band, with its dynamic stage show has been wowing audiences from the UK to Europe to Dubai and was the headline act at the very first B-Fest in 2015.

A choreographed stage show, with spectacular and authentic costumes, high class production including dramatic and striking lighting effects. The show includes stardom, showmanship and an energetic performance from Joseph Lee Jackson as 'Freddie', together with excellent musicianship, including beautifully crafted harmonies, and intricate guitar work from Glenn Scrimshaw as 'Brian May'.

Mercury takes their audiences through a legacy of songs which never lose their stature as classics to live on forever. Mercury play theatres, outdoor festivals, high profile corporate and private events, gaining a renowned reputation, and returning to venues time and time again. Other prestigious shows include headlining a New Year's Eve Festival in Dubai which was broadcast live to millions via MTV Asia. Mercury were also asked to perform at the unveiling of the 1st memorial to Freddie Mercury in Feltham, in front of Brian May and Freddie Mercury's family.

ELO AGAIN are back with their stunning 'Re-Discovery Tour' celebrating the truly universal music of Jeff Lynne and the Electric Light Orchestra. Now in their 8th year ELO AGAIN really give you a dramatic taste of what a legendary ELO concert would have been like back in their heyday, the whole experience is professionally re-enacted with a great sound reproduction, light show and visual effects.

The Eighties were a time of radical changes. In the aftermath of the punk revolution, daring New Romantics embraced developing sounds and technologies to transform the music industry forever. Electromantic's pay tribute to this era, with a lovingly recreated live show that is certain to transport everyone back to the dawn of New Wave and beyond.

A B-Fest favourite, covering huge floor-filling anthems from the Mod & Ska world with one mission ... making sure the public gets what the public wants!

Mollie Ralph mesmerises and draws in her audience at every gig with her soulful tone, dynamic range & subtle guitar work. The phrase "One to watch" gets thrown around quite often, yet this is undoubtedly apt when it comes to Mollie and her rapidly growing hype in the local music scene. Inspired by such classic performers as Etta James & Norah Jones, Mollie has managed to reinvigorate this soul sound with her own style and introduces it to a new audience.

All eras of Taylor Swift's music are covered by Katy Ellis, thus including the development of music genres and vocal evolution in particular. Beginning at Taylor Swift's early country twang, to her current pop music influenced voice, this Taylor Swift Tribute has a keen eye for detail that is second to none. With the finest collection of replica costumes from all of Taylor Swifts Tours, the addition of both fantastic lighting and sound equipment, this show is the ultimate Taylor Swift Tribute.

We are delighted to announce that local company Ranch will be this year's headline sponsor of Bingham BFest 2022. Working with a company such as Ranch whose foundations and commitment to the local community are well known will ensure we have an event to be proud of. 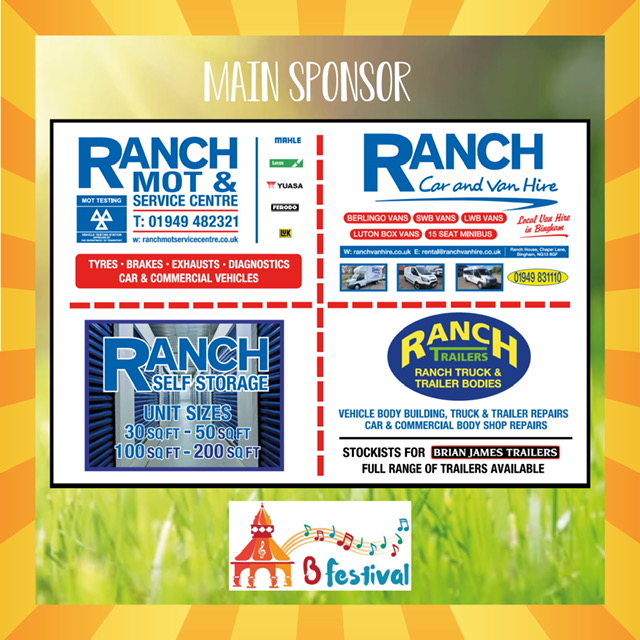 On Saturday the 9th July 2022 Bingham Town Sports Club will be holding “BFest”, the sixth edition of our family focused music festival to be held at Butt Field. BFest is being organised by the volunteers of Bingham Town Sports Club Committee who are responsible for the upkeep and development of the facilities at Butt Field, Bingham which are used by Bingham Town Youth & Senior Football Clubs and Bingham Town Cricket Club. The funds raised from BFest will go towards upkeep and improvment of the facilities for the 400+ children and adults who use them.

The event itself will be held at Butt Field, Bingham and will feature a mixture of bands from the East Midlands but with an emphasis on local music wherever possible. To give BFest an overwhelming finale the closing headline act will be Mercury - The World's leading 'Queen' Tribute Band who after over a decade on tour, have firmly established themselves as one of the world's most authentic tributes to the legend that is Freddie Mercury and Queen.

BFest will have two stages one acting as the main stage and the second featuring further artists and local up-and-coming acts. The event will also feature other activities including, children's funfair rides, food stalls and outside bars, face painting, etc.

Entry into BFest will be from 11:45am, with the first bands performing from 1pm and our headline act finishing by 10pm.

There will be no ticket sales on the door - tickets must be purchased in advance.

All members live locally, both Chris Turnbull and Chris Starmer living in Red Mile and Jon Garner hails from Newark.

Guitarist Chris Turnbull born and raised in York spent his youth singing and playing guitar in Soul bands before moving to Nottinghamshire, Chris is currently involved with a variety of local bands providing session guitar and drums for local artists.

Jon Garner is currently playing bass guitar in a well-established blues band and has played in numerous bands across the midlands since the late 1980s, playing a variety of local venues including Nottingham's famous Rock City.

For B-Fest the band are looking to play a variety of upbeat classic feel good songs from bands such as, The Small Faces, The Kinks, through to The Who, Paul Weller and The Foo Fighters.

Jacks Got A Plan

Three piece singer songwriters Johnson, Hanlon and Bogue are Jack's got a plan. A Midlands based rock pop trio with a catalogue of original material derived from real life experience, wrapped around killer hooks and brought to life with three part vocal harmonies.

My name is Tiegan or Tigs for short, I'm 23 and I've been singing for a really long time - most of my life! Music is one of the things I use to express myself, especially my emotions. You can know that I'm sad, angry, happy or a mix of them all just by what I'm singing in the shower. I'm a local from Bingham, I've grown up here and I'm always super honoured when asked to play at local events. The style of music that I currently do is acoustic covers, most being current pop songs/ballads with a possible pop punk song thrown in.

A 3-piece alternative rock band from Nottingham featuring elements of Blues, Grunge, catchy choruses and powerful guitar riffs. Taking influences from the likes of Nirvana, Royal Blood and Foo Fighters. We have recently played a number of gigs under a Nottingham Record Label at some well-known gig venues across the city.

Bingham's own Richard Hardy is back for a third year at Bfest. This time with new band West O' the Moon featuring Murray Reilly on lead guitar and Steven Hardy on bass - all fellow Bingham dwellers! We'll be bringing a set of festival favourites to get the party started on the Acoustic stage!

The Promoter (Bingham Town Sports Club) reserves the right to

Festival safety rules to be followed at all times

Other Festival info to be aware of